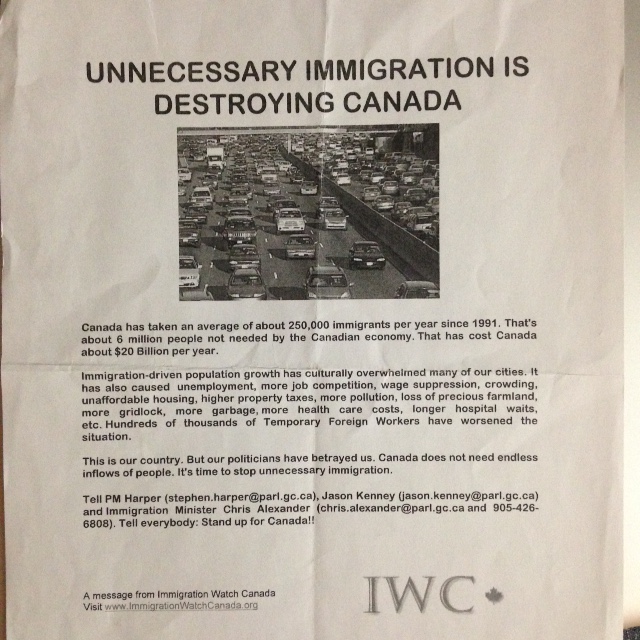 Racism in the News

Greater Vancouver has once again made national news because of its ethnic tensions. The Richmond News initially reported on xenophobic flyers, which were placed in mailboxes in Steveston on November 17th. This story was quickly picked up by CBC News, the Huffington Post Canada, and other national news outlets. A week and a half later, more flyers were left in mailboxes in the city; this time, Immigration Watch Canada claimed responsibility.

These incidents in Richmond appear to be part of a wave of literature targeting ethnic and racial minorities in Edmonton, Toronto, and Montreal. Some of the flyers in Richmond, Edmonton, and Toronto explicitly refer readers to “alt-right” websites. Though it is unlikely that the distribution of this literature has been coordinated, it does follow on a string of racist and xenophobic incidents in the United States and Canada in the wake of the election of Donald Trump as U.S. President. Trump’s victory has clearly emboldened the alt-right, with even Canadian members of the movement feeling that his victory signals a tide-change in this country. As the Canadian alt-right mouthpiece, the Council of European Canadians, put it: “We can now practice a more direct form of politics…”

Given that there has been a print media and social media circus surrounding the American election, it begs a question: Are these incidents in Richmond indicative of a larger problem, or are they anomalous? Are we, perhaps, more attuned to such incidents at the moment because of the media frenzy?

By way of explanation, let me share a personal anecdote. Last March, the City of Richmond held a forum on foreign-language signage at the UBC Boathouse on River Road. It was an extremely well-attended event. Although I had reserved a seat online, when I arrived the organizers had no record of my reservation. As I was waiting to get in (which I eventually did), a man handed me a flyer that looked like this: 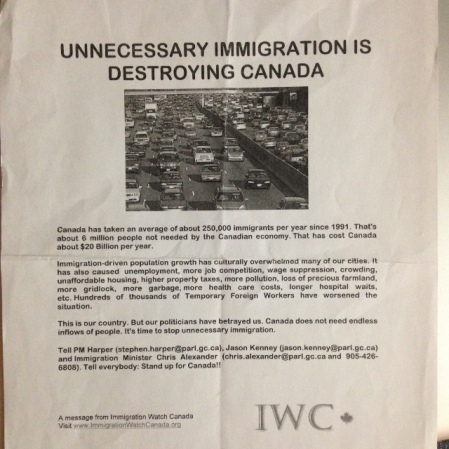 While the language on this flyer is arguably not as inflammatory as that of the flyers that were distributed this November, the message is similar: immigrants are not wanted, and they are ruining our country. However, the local media did not report on this flyer at the time. Did they not report on the flyer because it was uninteresting? Were they expecting Immigration Watch Canada or similar groups to hand out flyers (and therefore it was not deemed newsworthy)? Did they simply miss it entirely? (Journalists are humans too!)  More than likely, the journalists at the forum were a lot more concerned with what was going on inside the event than what somebody was handing out outside of it. But it is interesting that what was apparently not newsworthy at the time is now national news.

Over the past couple of weeks, I have been wondering what the landscape of racism in the news looks like in Richmond and Greater Vancouver. What follows is a preliminary report.

Note on methodology: Using online databases (mainly EBSCOhost, Google News, and newspaper databases), I have compiled lists of racist and/or xenophobic incidents reported in print news in Greater Vancouver for the past ten years (2006-2016). In most (but not all) cases I was able to verify that these events took place by looking at more than one news source. The data for Greater Vancouver includes Richmond, as well as Vancouver, West Vancouver, North Vancouver, Burnaby, Coquitlam, Surrey, Delta, and Langley.

The findings for Richmond are, for those of us who live here, not all that unexpected. Overtly racist incidents that are reported in the local news are few and far between. However, anecdotal evidence — or what we might call “collective memory” — would suggest that racism (by all groups and individuals) is much more widespread. Some incidents stay under the radar because they are simply not reported in the press. The Simon Wiesenthal Centre and B’nai Brith Canada, for example, publish statistics about antisemitic incidents that are reported to them, but some never make it into the news. For example, in 2014 I stumbled across a swastika that had been painted on public infrastructure at Garry Point Park in Steveston. 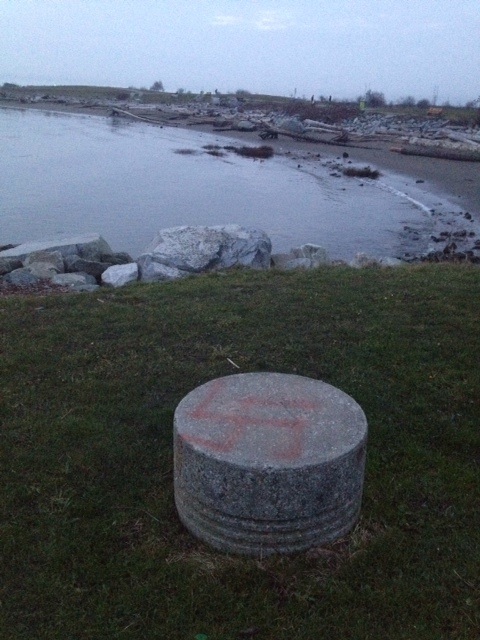 I reported the incident to B’nai Brith (or the Anti-Defamation League — I can’t remember), but the incident was never shared with the press, as far as I know. I made the assumption at the time that it had either been reported to the local media or would be reported. In other words, news reports are far from the whole picture.

The data for Greater Vancouver is much more disturbing. As we can see, there have been 29 incidents in the past year, 20 more than the previous year. 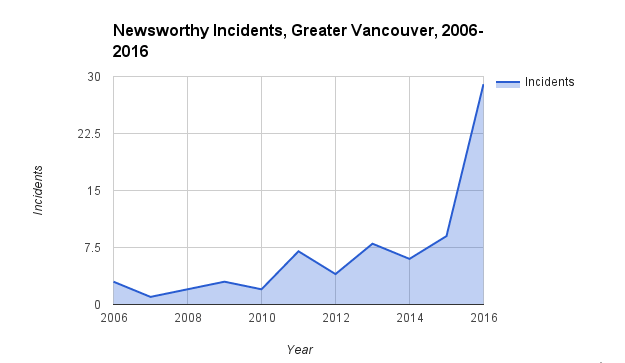 I think there are a number of reasons why this number may be higher than in previous years. In no particular order, here are some possible factors:

What are we to make of all of this? Well, I don’t know yet. There is still much work to be done in cross-referencing this data. Specifically, I hope to contact municipal police and RCMP detachments in the region to obtain statistics on racist incidents. By comparing their data with the data I have gathered about ‘newsworthy incidents,’ I hope to have a better picture of what our local media and social landscape really looks like.

I am also hoping to turn this database into a collaborative project at some point in the near future, so that individuals can contribute both incidents that have been reported in the news, as well as those that have gone unreported.

Finally, it is worth saying that not all of these flyers (or their creators) are, by definition, ‘racist.’ There is a legitimate public discussion to be had around the issues of immigration, multiculturalism, and ethnic diversity. These flyers raise these issues, but they do so in a confrontational way.

However, I think that the popular perception is that these flyers are a means of expressing racist and/or xenophobic sentiments in an acceptable format. The inflammatory language used (“Step aside whitey! The Chinese are taking over!”) overshadows the message (that there are problems with home ownership and language, due to in influx of non-English speaking immigrants over the past couple of decades). In addition, it is very difficult to divorce the messages on these flyers — however valid — from their association with the politics of the alt-right, which is a movement that has strong links to white supremacy. In other words, we are using ‘racist’ as a shorthand for ‘looks racist.’

View all posts by multiculturalismcanada